Peter Jackson’s superb direction of the Alice Sebold book, The Lovely Bones, is a spirited showcase for one of film music’s more unique talents. Composer, Brian Eno is a musician/producer known for collaborations with Roxy Music, The Talking Heads, U2 and Coldplay.  His music in The Lovely Bones is right on the mark. 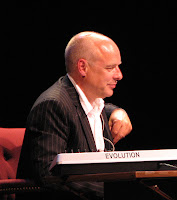 There are no plot spoilers in this review but the scene dissection may affect its impact, hopefully for the better.  This film music review focuses on the tragic scene that initiates 14-year old Susie Salmon’s afterlife and the course of events for her family and friends.

Leading into this scene, we meet Susie’s would-be boy friend in an after-school hallway encounter that leaves her exhilarated.  The music starts as the boyfriend walks away and we see Susie glowing with romantic possibility.  It is a simple musical suspension that clues us in to her euphoric state without over dramatizing the emotion.

As she leaves school, the cue builds into an easy going, “kick-the-can” feel.  We see her walk past a group of kids playing soccer and she heads off across a barren cornfield (her “shortcut” home).  By the way, it’s getting dark…

The happy theme falls way as Jackson begins a cross-cutting sequence – moving between scenes of the family at home preparing for dinner and the corn field where the tragedy unfolds.

We see Susie, fumbling with her hat, dropping a book and watching a mysterious note fly away. A new motif appears in the form of a short repeating chord cycle played on the piano. It is not foreshadowing, nor is it particularly uplifting. The repetition, however, drives us into our seats as we begin to realize that she is walking into a trap.

The editor takes us back to the family scenes while the entrapment motif highlights the possible mistakes made by her family and her own grave mistakes in the field.

The music stops when she loses the mysterious note — a love poem from her would-be boyfriend. This is the point where she hears and sees her murderer, a neighbor who wants to show her “something cool that all the kids are gonna like.” We can easily squirm at Stanley Tucci’s, Mr. Harvey with no help from music or sound effects.  In fact, his character is more effective that way. 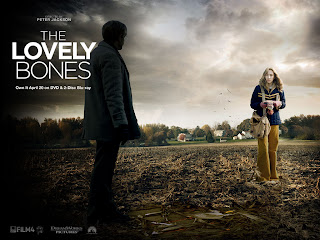 It’s no accident that the music starts again at the pivotal moment when she decides to walk with him. The cross cutting continues while the entrapment theme comments on the sequence of unfortunate events in the field and her mother’s growing concern at home.  We can feel it in sound the dishes make as they slide across each other and land on the table -- like a knife being sharpened.

The music again continues in opposition to the happy family scenes but is even more resonant as Susie begins to trust Mr. Harvey and she makes her last mistake.  Now the tension increases, in part because the music is replaced by sound design elements – abstract sounds that seem to emanate from her imagination as she realizes her entrapment by the increasingly strange Mr. Harvey.

We see the wheels turning in her head as the swirling sound effects ratchet up the tension.  Susie’s escape is accompanied by screeches, low rumbles, metallic gong splashes and that old standby, a beating heart.  Is she really getting away or is this all in her head?  We see Susie running past another student now on a darkened suburban street.  The chugging sounds and distant scream conjure images of a speeding train as she runs past a class mate. The sound confirms our fears but the ambiguity is riveting.

This scene shows how powerfully the combination of music, silence and sound effects can amplify a story line.  In this case, the sounds themselves reveal the truth that the camera wants to hide. What we have here is not a failure to communicate but a sophisticated use of sound with visual elements to reveal the truth gradually.

Sound design continues to dominate the soundtrack as Susie comes to terms with the afterlife and finally settles into what the story calls, “the in-between.” Eno’s melancholy piano and ethereal electronics underscore Susie’s dreamlike adventures in her new world and the new connections she is building to those she left behind.

The escape scene itself, like so many films, follows the classic film (and story), “An Occurrence at Owl Creek Bridge.”  The film making team includes refreshing voices in the scoring and sound design department.  Eno’s music is a welcome departure from the formulaic composing that Hollywood tends to nurture.

Now that you know how it works, watch it again.  It's chapter 3 on your Blu-ray or DVD.