The Appassionata Strings collection expands on VSL strings by introducing string ensembles built for lush and passionate performances.  In this review, I’ll see how they soar or perhaps roar in a film score arrangement.

To get make full use of the VSL libraries, I use an Intel MacBook Pro and a G5 tower, both running Mac OS 10.5. I run Logic 9 on the MacBook and use Vienna Ensemble Pro (sold separately) to host my Vienna Instruments strings and brass on the G5.  (A Vienna Ensemble Pro review is in the works…) 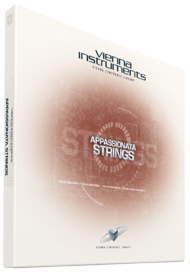 Appassionata Strings 2 features most of the same articulations in AS1 in their muted form.  Both libraries are 24-bit samples at 44.1 kHz sample rate.  AS2 takes 7GB of disk space in compressed form but represents almost 11GB of audio.  AS1 uses 12GB on you hard disk but represents 18GB of audio.

Vienna Instruments use a custom player, which operates in stand-alone mode and in a DAW using VST under Windows XP and Audio Units, VST and RTAS on the Mac.  A Vienna Key or compatible Synchrosoft USB key, such as those used by Steinberg and Arturia is required.

For large orchestrations I was able to free up memory in Logic 9 by moving some of my Vienna Instruments into a VEP server running a second machine.  I used VEP to balance the processing and disk I/O between my MacBook Pro, running Logic 9 and the G5.  Another advantage of VEP is the pan control – this allowed me to pan the string sections where I wanted and control their width all from the second machine.  This saved processing power on the main DAW machine for other virtual instruments and aux channels for reverb.

Both products come with full keyboard layouts and separate instruments with violins, violas, celli and basses.  The full range layouts were extremely valuable for sketching out a part or creating a quick mock-up from my Yamaha 88-key weighted action keyboard.  I used the automatic round robin staccato parts for action string bass parts on a couple of film projects.  Check out the two demos below from my score for Rogue Hunter, a spy thriller for the post-Bourne age.  Oh, and Matt Damon, please make another Bourne film….

The next example shows again how well the alternation works in a repeated note staccato part.

The last example shows the beauty of the sustained strings and how well they blend with other VSL instruments in a full arrangement.  The main theme played in the Epic Horns of the Brass II set enters at around 50 seconds.  The expanded string sections once again carry the rhythm with all the impact I was looking for.

Appassionata Strings II has my go-to sound for soft melodic strings.  The rich muted textures were perfect in the melody for a waltz I was asked to write for a short film in 2011.  Adding the octave melody in the repeat gave the piece a very cinematic touch.

There are some powerful performance setups, or matrixes, in VI-speak.  The universal performance matrix, for example, in the muted strings, comprises three useful layers that are switched using the mod wheel.  The normal setting is a performance legato set, the middle setting is marcato and full wheel is spiccato.  With a little practice, I found it very easy to switch between the three articulations while playing a fast melody.

There are many matrix sets of articulations making it relatively easy to create a realistic and varied performance in a single pass.  Yes, it takes practice to learn the product and these are large products but this is much better than having to record track after track of individual articulations to build a realistic phrase.  The key switches, wheel controls and universal speed controls make this a very expressive tool – with a little practice.

The other cool thing is that the Vienna Instruments player automatically switches between normal and faster versions of each articulation – making the connections between the notes more graceful at slower speeds while keeping the notes distinct for faster passages.  This is the kind of innovation that VSL is known for and what sets them apart.

I found the AP sets versatile enough for a variety of film genres.  The random pizzicato and the sinister note clusters will have a home in a suspense feature score that I’m working on.  Yes, we do need another ghost story…  Watch this blog for a look at the process.

The depth of the AP sets cannot be over stated.  I you need grace notes for the end or beginning of a run, there are three to chose from, including one where the strings draw themselves gracefully in tune.  As with all of the VSL sample sets, the recordings themselves are dry, giving you maximum flexibility in terms of acoustic setting.  What I’m trying to say is, you’re going to want to put some reverb on these samples and don’t be afraid to play with the panning and EQ to make them fit into your sound stage.

As others have mentioned, VSL products represent the pinnacle of aesthetics and technology in the service of creativity.  Appassionata Strings products are among the best representatives of those qualities.

Whether you are working on a film or concert piece, Appassionata Strings raise the bar in terms of expressive control in a large ensemble string library.  These are exceptional products from a company that seems to know exactly what composers and arrangers are looking for before we even know ourselves.

•    Pristine recordings suitable for any setting.
•    Expressive articulations with key switched and automatic modes
•    Add Vienna Ensemble Pro to balance processing load with other VSL sets and other instruments
•    Useful matrix combinations bring many articulations into a single performance