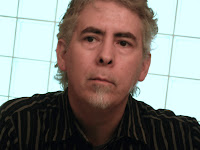 Occasionally  I receive questions from high school and college students about film scoring.  Here are some of the more common questions on composing for modern features and re-scoring classic silent films.

What inspired you to switch from performing music in a band to film scoring?

I did some live accompaniment for a comedy show in the early 90’s and later got a gig playing piano for silent films at the National Museum of Women in the Arts. The real break came when I started Silent Orchestra with percussionist, Rich O’Meara in 1998.  We both enjoy improvising a feature film score with only a few weeks preparation.  OK, the short answer, is I still perform publically, although not as much as I did in the 80's and 90's.

How are they similar/different?

•    TV/Film composing is usually a solitary activity. Whereas any band situation is always a collaboration.
•    It’s easier to know how much you are appreciated by your audience if you are in a band, whether it’s through recordings or a performance. As a score composer, you are generally thought to be good if the audience does not notice your work.  Reviewers rarely comment on how well the music works in a film.
•    In both cases, you are trying to convey a mood or feeling to an audience and the ways you do that are roughly the same. Your tools are melody, harmony, rhythm and choice of instrument sounds. For example, a minor key works the same way for pop music as it does in a score.
•    A key difference is that music on its own creates it's own context. A sad song is always a sad song. In film, there can be a very sad story but if the music is only slightly sad, then it might actually lift the mood a bit. So directors turn to composers to help modulate the tone of the film. We can help fine tune the mood or we can set the mood outright.

What are some of the challenges of scoring music?

Most of the major films and many independent films have a very tight schedule.  Since the score typically goes on last, after the editing is done, there is a lot of pressure on the composer to work quickly. It’s also the last chance for the filmmakers to improve any parts of the film that did not turn out as well as expected. For that reason, composers are sometimes expected to “fix” a scene that is not working.

The most rewarding challenge for me is writing music that contributes to the meaning of the film. Music has to fit in whatever scene it’s written for, flow naturally from the last scene, set up the next scene and fit in the overall context of the film.  As I said, you generally have to do all that without calling attention to the music.

What is it like playing music live to a silent film? Is it easier or harder than pre-recording it?

Performing a silent film score is a lot of fun. I enjoy hearing the audiences react to the film and to our music. I look forward to shows with my band, Silent Orchestra. We’ve made two DVDs with surround scores for silent films. With Silent Orchestra, we enjoy both live performance and recording because we improvise in both cases and that leads to some nice surprises.

When I started doing silent film scores I was playing solo piano behind the screen at the National Museum of Women in the Arts in Washington, DC. The image was reversed so it was harder to read the title cards and the screen was very thick so I had to have the lights way down to see the picture. It was always a blast to have them raise the curtain at the end so the audience could see me. Eventually they let us set up in front of the screen so the audience could watch us play.

Is it hard to write music for multiple instruments at once?

Sometimes I write for specific instruments but usually just one at a time. I then use the studio to layer other parts. That lets me focus on just one instrument at a time.  Lately, I’ve been writing at the piano and then arranging the voices for symphonic instruments when I record it. In fact, I might record a piano part first and then go back and duplicate each voice with a symphonic instrument using the piano track as a guide. I can then mute the piano track when I am finished or use it to add some punch.

Do you generally write film scores to what’s directly going on in the film, or to fit the mood as a whole?

There are many ways that film music is used. Sometimes it bridges two scenes; sometimes it establishes a mood for the overall film. In a recent short film I mostly played to the mood of the main character in each scene. I try to shed some light on the character’s state of mind while fitting into the overall meaning in the film. Sometimes I use a leitmotif to identify with a particular character or theme. If I use it throughout the film, the audience learns to identify the meaning and it helps make connections between scenes or characters.  For example, in the short film, A Rock and aHard Place, I used a snare drum riff to represent the authority figures. Snare drums are used a lot in military films so there is a natural connection for an audience with respect and authority.

How important are technology and sample libraries to your work?

A good musician playing an acoustic instrument is always more expressive than a virtual instrument.  That said, today’s virtual instruments provide tremendous expression opportunities.  A lot of TV shows are now scored with a small team using guitars, drums and virtual instruments, whereas years ago it would always be a studio orchestra. For major films, the standard is still the symphony orchestra but for some genres, electronic sounds are necessary. I love the way some composers combine synthesizers (electronic sounds) with the symphony orchestra. For example, Hans Zimmer and Jerry Goldsmith.
Posted by Carlos Garza at 8:23 PM