Music in THE DESCENDANTS 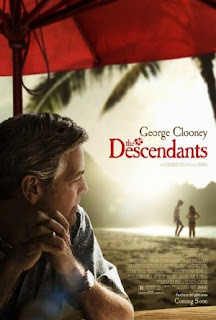 I'm ending 2011 with a few thoughts on the music for Alexander Payne's highly acclaimed film starring George Clooney, which (at the time of this writing) has five Golden Globe nominations and surely more accolades to follow.

Clooney plays the husband of a woman who is in a coma as a result of a boating accident.  The film is centered on his struggle to cope with their two headstrong and independent daughters. Of course, things turn out to be even more complicated and that gives rise to a variety of emotional and even some lighthearted moments.

The soundtrack is made almost entirely of Hawaiian songs and guitar instrumentals. The moods range from comforting to melancholy -- not a broad pallet but that works well for the film.

Beyond the obvious geographic grounding, the music provides a tonal center for the film. While the characters go through shock, denial, guilt, sorrow, and a few upturns, the music keeps the lows from being too low and the highs safely out of sitcom territory.

From the opening titles to the end of the film, we are constantly reminded that we are in Hawaii.  Clooney's narration informs us that the people of this paradise are subject to all the good and bad that comes with being human.  The slack-key tunings and melancholy vocals provide comfort to the viewer as we imagine it would to the characters, who it turns out are descended from a native Hawaiian.

The music bridges the scenes and shows the passage of time while the characters move between locations and sometimes between islands.  In one scene, George Clooney's character, Matt King and his daughters visit another island and drive out to view a beautiful stretch of land that has been with their family for roughly five generations.

During the drive, the music seems very uplifting and matches the emotion. As the car stops, the up-beat tone ends and a lighter, instrumental section takes over. The music almost seems diegetic in this scene.  It's as if the music was playing on the radio and just happens to end as they arrive. Thankfully there was no effort to make if literally diegetic by having someone turn off the radio.

One of my favorite moments in the film, musically, is when the family arrives at a restaurant/bar where Matt meets his cousin, played by Beau Bridges.  A Hawaiian guitar trio is performing to an appreciative crowd.  At the bar, Matt receives information from his cousin that hits him like a ton of bricks.  As he sits down to join his family, the band breaks into a yodeling song.  The overtly happy -- and to the protagonist, clearly annoying -- music accentuates the chaotic turn of events.

This music however fun it might seem to some, it exactly the last thing the Clooney character wants to hear and this draws us into deeper sympathy with the character. As Payne stated, "My impetus for choosing that yodeling song was to have something ridiculous and grating accompanying the protagonist's confusion and alienation."

I love the way music is used in this film.  The acting is tight and there are no weak players.  The kid actors are excellent too.  It's a well written and hopeful story that I found captivating at every turn.